Hit enter to search or ESC to close

Dodecanese, meaning “12 islands” in Greek, is a cluster of twelve islands in the southeastern edge of Aegean Sea. They are closer to Turkey than Greece. Each island has a character all its own and these islands have a long and rich history, with traces from classical Greek times through Byzantium, the Crusaders, Venetians and Ottomans. 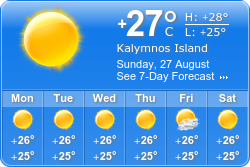 Kos is also known as ‘Istankoy’ which is the hometown of Hippocrates, the father of medicine. There is a square and an old tree named after Hippocrates on the island. Being a place where Turks are in majority, Turkish-Greek synthesis was passed on to the cuisine with joint flavors. Oleanders and bougainvillea accompany its striking architecture. Two mosques named Laziya and Defterdar are the traces of the Ottoman Empire. It is rumored that the Neratzia Castle, located here, was built by the Knights of Rhodes to protect the island from the Ottomans. It is also possible to see the ruins of the ancient hospital dedicated to the God of Health-Asclepeion. Zia Village is among the places you can visit to enjoy the most delightful sunsets of the Aegean.

Nisyros is known as ‘Incirli’ in Turkish. It is a volcanic island with a rich flora. Nisyros is the home for the traditional product of the non-alcoholic almond flavored drink called, ‘Soumada’. Near Mandraki, are ancient walls from the 5th century BC, a medieval castle and the largest monastery. You can see the crater, which has been bubbling since 1888, after a hard landing. You can visit the Volcanology Museum to learn more about the crater, which makes you feel like walking on Mars.

Tilos is one of the islands of Dodecanes. The shores are surrounded by rocks and mountains whereas all shades of green are dominant in its inner regions. The island has been declared a Natural Protection Area by the European Union as it hosts raptorial birds due to its geographical features and accordingly has become an important center for bird watchers. A dwarf elephant skeleton, which has gone extinct 4000 years ago, was found during historical excavations on the island which you can see in the museum in Megalo Chorio.

Symi is known as ‘Sömbeki’ in Turkish. It is the junction where the Aegean Sea meets the Mediterranean. Rocky cliffs and sandy caves dominate its shores whereas small valleys are placed in its inner regions. The Symi Folklore Museum displays pieces from the Hellenistic and Roman Periods. The Maritime Museum, reflecting its neoclassical architecture is among the places you can visit to receive detailed information about Symi and the Aegean. Chorio Hill is well known for its panoramic views. Within walking distance to the hill is the Megali Panagia Church.

Rhodes is the largest of the twelve islands which is divided into two as the new and the old cities. Surrounded by medieval walls, the old city has been declared a World Heritage Site. Due to its strategic location, the island has hosted different civilizations throughout the history scene. The Rhodes Statue, one of the seven wonders of the Ancient World increased the popularity of the island. Butterfly Valley, located in its inner regions, is one of the most spectacular natural beauties. Lindas Acropolis at the top of Lindas and its view can also be an interesting visiting option in Rhodes. Hippocrates Square, Socrates Street, Knight Street and Grand Master's Palace are among the historical landmarks, attracting Rhodes’ visitors.

Ask everything for your dream holiday